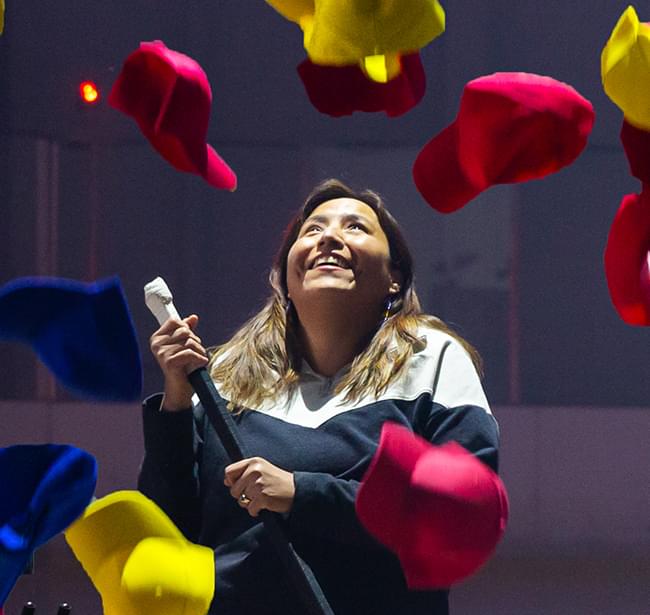 It was an unbelievable morning when Sherry from Rama First Nation woke up to check her winning PRO-LINE POOLS ticket and discovered she had won $75,904.90.

“I didn’t even feel like I slept that night because I knew I had won.” The 42-year-old mother of three recalled.

“It was early in the morning and the kids weren’t even up for school yet. I went to the OLG website to see how many winners there were. I was pretty much looking at my phone with one eye because I was just waking up. I had to give my head a shake. I underplayed it thinking ‘oh it’s just going to be two or three thousand [dollars]’. When I saw it was $75,000, I was blown away. My heart was pounding. I couldn’t believe it.”

Sherry wondered, “Am I awake? Am I dreaming? I kept refreshing the page. I was all shaky and I was trying to be quiet because I didn’t want to wake the whole house up, and I did. My husband was like ‘what’s going on’ I said, ‘I won seventy-five thousand dollars!’”

This win had a big impact for Sherry and her family. Last year, Sherry went back to school to become a social services worker. “I was in school when I won and winning made it so much easier, financially. I love it, it’s a big career change. I’m excited to get into it.” Sherry hopes this new direction will give her the opportunity to apply her knowledge in her own community. “I hope so, I want to help and give back.”

“The first thing I did with my money was share it with my husband. We paid some debts and bought some things for the house, but because of COVID it’s still in the bank.”

A few months after her win, Sherry was pleasantly surprised again when she received an email from OLG to be part of a TV commercial. “I have never been on TV; this is so exciting. I can’t wait.”

But the production team decided to hold back some details to maintain a bit of surprise and excitement on shoot day. “I’m excited to see what’s going to happen. I’ve heard that there might be confetti. It’s exciting!”, Sherry shared.

After wrapping for the day, we sat down with Sherry to see how she was feeling.

“It’s been a great day! Pretty surprising. It felt like a dream come true. It was awesome!”

The TV commercial isn’t the only first experience for Sherry on this day. It also happened to be the first time Sherry played hockey! “I was very surprised to shoot a puck in the net,” Sherry said. “I was pretty happy. They dropped 500 hats all over me from the air and they had a huge banner made with me on it. It was pretty funny; I’ve never seen anything like it.”

Sherry was excited to tell her family about her exciting day on set. “I don’t think my family will believe it. I know my daughters are going to be like, ‘wow mom that’s amazing!’ And I’m so excited to tell them because I’m always trying to encourage them to do whatever and this [commercial] is going to be a good example for them to just go for things.” Sherry plans to continue the fun for her whole family when it’s safe to travel. “I’ve always wanted to take my kids to Disney World and that’s what I’m saving it for. I can’t wait to take my kids to Florida. We’re going to celebrate birthdays and all the things we missed because of COVID. It’s going to be a lot of fun.”

Winning with OLG, brings out all the feels!

Am I awake? Am I dreaming? I kept refreshing the [web]page. I was all shaky and I was trying to be quiet because I didn’t want to wake the whole house up, and I did.