"I pinched myself and thought; is this real?" 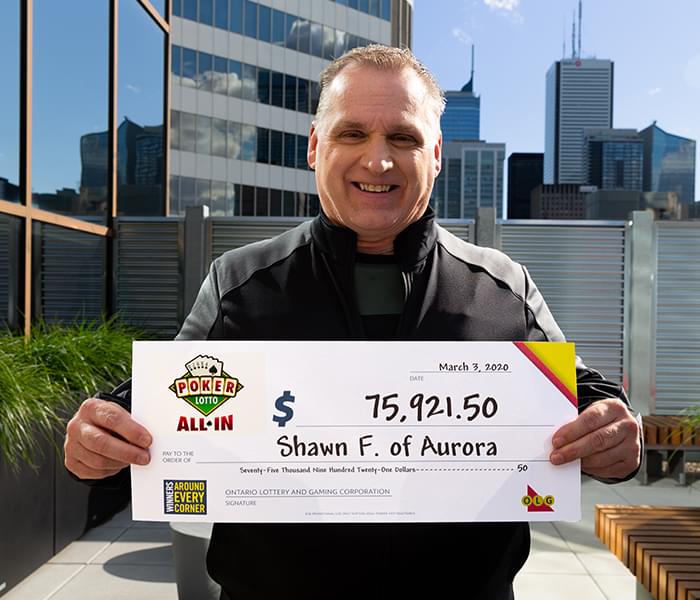 It was Shawn's day off, and he was running an errand. He had no plans to stop anywhere. But as he was driving past the convenience store where he normally stopped off on his courier route to play POKER LOTTO, something told him to turn left.

“It didn’t make any sense to turn left, but something made me pull in and go play,” says the 56-year-old dad of two. He opted to add ALL IN to his POKER LOTTO play and that $3 resulted in a pair of aces, winning a free $2 ticket. The clerk asked Shawn if he wanted to add ALL IN again for $1 and a chance at the growing the jackpot. He said yes.

“I’m standing there not even paying attention to the screen, and then I can see I’m one card away from the royal flush,” he recalls. Then the screen lit up. “I say to the guy standing behind me, ‘Are you seeing what I’m seeing?’” recalls Shawn. “He says ‘Congratulations’ and I’m pinching myself, thinking, is this real?” Shawn walked outside and got in his car, reeling, then texted his son Ryan a picture of the ticket with the message “I just won $75,000 in poker.”

The answer came back: “YOU DID IT” and then: “Now you can get your book going!”

That reply was a testament to their close relationship and how well they know one another – because that’s exactly what Shawn did with his winnings.

Back when his kids were young, 4 and 7, he had begun telling them fantastical bedtime stories each night. They’d go into the bedroom closet and pretend they were travelling through space and time.

“It was the cutest thing. We’d open the closet door and creep out into the bedroom to have this magical journey.” The kids would play along, and they’d act out the stories together.

As the kids got older, story time gradually ended. And life happened along the way: Shawn survived cancer; non-Hodgkin’s lymphoma. One difficult day when his son Ryan was 13, they were sitting together in the family car, and to cheer his dad up, Ryan reminded him of the stories he used to tell, and suggested he write them down. So that’s what Shawn did, eventually writing 20 children’s books based on his kids’ childhood adventures. The books centre on two children named after his own kids, Jaime and Ryan, who meet Maxamillion, gatekeeper to a magical doorway. Maxamillion takes the children on journeys though space and time, teaching them about history, myths and legends.

The books sat unpublished until recently. As soon as Shawn received his lottery winnings he found himself a publisher and got to work. The first book in his Adventure Closet series, Land of the Dinosaurs, comes out this October, to be followed by the other 19 — plus another 10 he’s already roughed out and potentially more. He also plans to write a memoir.

Of course, Shawn also made a few fun purchases for himself and his kids when he collected his winnings. He drove to Windsor where his son goes to university and took him grocery shopping, plus bought him some new headphones and sunglasses. He paid his own bills and took care of repairs on his 10-year-old car. He bought himself a bicycle. But he set most of the money aside for his books.

“I didn’t go too crazy,” he says. “I look at money as a tool, that’s all. I needed the tool to start the projects.”

Ryan says “a big wave of joy” hit him when he first learned about his dad’s lottery win (sitting in a doctor’s waiting room), realizing Shawn would now be able to publish his life’s work.

“A big smile came across my face,” he says. “I was just like, ‘he did it, he finally did it.’” He views this as the culmination of his father’s many struggles over the years. “I just think there is a right time for everything,” he says, “If he had won this money even five years ago, it might not have been right… but this is the right time for this.”

Shawn is similarly philosophical about the experience. “The universe opened a new door for me and said go through it. This is how the universe works. It knows when you’re not ready, but when you are, it opens that door for you,” he says. “Just like in my books, it’s a magical gateway. You have to go through that gateway to start the journey.” And sometimes the journey begins with one left turn.

I pinched myself and thought; is this real?