"So many emotions of happiness!" 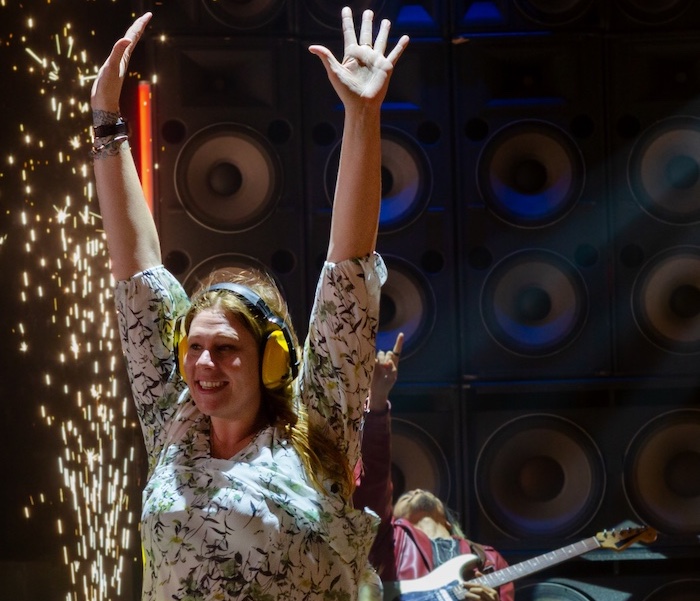 ENCORE, ENCORE… ALVINSTON MOTHER OF TWO FEELING LIKE A ROCKSTAR AFTER ENCORE WIN

It was in the early days of the pandemic when 32-year-old Rebecca from Alvinston purchased a LOTTO MAX ticket with ENCORE from her local convenience store. The mother of two is not a regular lottery player, but that week, she was hoping for something exciting to happen.

Two days after her purchase Rebecca returned to the store to check her lottery ticket. As she scanned her ticket at the Ticket Checker, she saw ‘BIG WINNER, $100,000’ pop up on the screen. Rebecca had won $100,000 by matching the last six of seven ENCORE numbers on her ticket.

“I was kind of dazed, but I announced, ‘I just won $100,000’ in the store and the clerk said ‘yeah, ok’,” Rebecca laughed, as she recalled the moment she discovered she had won. “I handed him the ticket and the next thing I know, the lottery terminal locked.”

The feeling of disbelief washed over Rebecca as she stood at the counter, “I kept telling myself that I’d only won $100 or $1,000,” she continued. “The longer I stood there, the more it sunk in and I started to accept that this was really happening.”

Excitement rolled over Rebecca in a wave. She needed to share the moment with her family. “I called my mom while I was in the store,” Rebecca said. It was a few days after April 1, 2020 and Rebecca received another ‘yeah, ok’ from her mom who presumed it was a delayed April Fool’s Day prank. “I don’t think she really believed me until I showed her the [validation] slip from the store.”

Telling her daughters about her big win was a different experience all together. “They don’t understand how much it is or how much it was going to affect our lives,” Rebecca recalled. They did understand the feelings Rebecca was experiencing, “they were just watching me, they’ve never really seen me like that,” Rebecca said. “You could see it reflecting back and forth between us with the excitement and so many emotions of happiness,” Rebecca recalled from that moment.

“Since then, I’ve purchased a new home,” Rebecca added. “It’s exciting. It brings stability to mine and my girls lives and at this point, it’s priceless. The girls know that it’s our forever home, until they move out. If they ever do,” Rebecca laughed.

A few months after her win, we reached out to Rebecca to participate in a TV commercial for OLG, and she was more than willing. “I almost feel like I won the lottery again,” Rebecca said while waiting for her first on-camera experience. Preparing for the TV commercial with the OLG team triggered feelings of anticipation and excitement for Rebecca that were just like the ones she had when she won the lottery. “It’s awesome,” Rebecca continued.

Rebecca had no idea what she was in for on the day of the TV shoot, as some of the details were kept back as a surprise. “I was told it would be a lot of fun,” she laughed. “I know I’m here to shoot a commercial, but I don’t know what I’m walking into. I’m very excited, I’m nervous, but I’m good.”

We had the chance to catch up with Rebecca after the big reveal.

“I didn’t know what was going on, they blindfolded me and walked me out there,” Rebecca said. “I was trying to put together what it was going to be. There were lots of different emotions. I was shaking, I had sweaty hands. I felt hot. I was trying to find a bit of reality to ground myself so I wouldn’t float away in the moment.”

When the blindfold was lifted, Rebecca looked around and let herself settle into the moment. “It was dark, I was lit up but everything around me was dark,” Rebecca described. “I first noticed the guitars and the musicians playing them.” Rebecca hadn’t been to a live music show since summer of 2019. “I love live music, with the pandemic, I haven’t been able to go to any shows, so this experience let me relive that joy I treasure so much,” Rebecca recalled. “The musicians were really feeling it in the moment, and you couldn’t be anywhere but with them. That was awesome.”

Rebecca said she could feel the music and the beat in her body, “you just have to move with it, you have to feel that beat running through you. I felt a lot of those same emotions being on stage with the musicians as I did when I won the lottery.”

I was trying to find a bit of reality to ground myself so I wouldn’t float away in the moment.