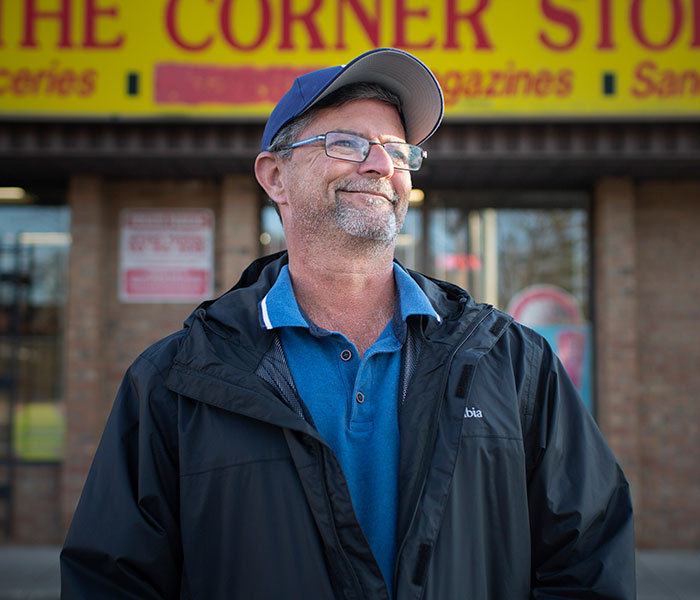 If not for the COVID-19 pandemic, Windsor resident Ken probably wouldn’t have won $100,000 in the lottery. Back in March, the 49-year old father of two and grandfather of two was planning a trip to Caesars Windsor casino. He’d even been to the bank to take out $50 – the amount he normally limits himself to when gambling. But then came the news: the casino would be closing temporarily due to the pandemic.

As a result, that $50 stayed in his pocket. Later, when he stopped by a local convenience store, he decided to spend his cash on lottery tickets. He splurged and bought INSTANT $500,000 CLASSIC EXTRAVAGANZA, a $50 pack of seven tickets.

This particular store was special to Ken: he had befriended the owner and helped her out over the previous couple of years, starting when two break-ins had nearly ruined the place. He had been there when she arrived to find her shop in disarray and witnessed her distress firsthand. So, he called a friend to help, and they assisted with cleaning up, patching a wall and, later, installing security cameras. He also volunteered to work some shifts in the store so that the owner could take time off.

She agreed, and from then on, he would relieve her from time to time. And Ken always went out of his way to shop there, instead of going elsewhere, to support his new friend. “I just kept going to the store after that happened,” he says.

Which is how he wound up buying his INSTANT tickets there and taking them home to scratch later. After watching a rerun of a football game with his roommate, he headed upstairs to get ready for bed. That’s when he decided to sit down in his bedroom and scratch his tickets. The second one in the pack, CLASSIC GOLD, had five “Lucky Numbers” along the top, and 25 spots to scratch looking for a match.

And wouldn’t you know it: the second-last number he scratched was a match! He was so surprised that he didn’t fully scratch off the box to reveal his prize amount, before racing back downstairs to show his roommate. So, at first, they thought he’d won $1,000. Or $10,000. But when Ken scratched the ticket fully, he realized it was actually $100,000. “[My roommate] just sat there and stared at it, saying are you freaking kidding me?” he recalls. They both questioned what they were seeing, turning the ticket over in the light and even taking photos to enlarge and scrutinize more closely.

Shaky but elated, Ken finally printed his name carefully on the ticket, and then tucked it under his pillow and tried to get some sleep. “It was a very long night holding onto that ticket,” he says.

In the morning, he went back to his friend’s store and asked her to validate the ticket. “I think she was more excited than I was,” he says.

When the lottery terminal played a tune and displayed a message saying “Big Winner,” she jumped for joy. Then they waited for OLG to call. “From there it was like, oh my gosh, this is really happening,” says Ken.

It was a few months before he could claim his prize and receive his cheque due to pandemic restrictions and temporary closures. When it was safe to do so, he made an appointment to visit the OLG Prize Centre in Toronto in person to claim the prize. (OLG currently requires winners of prizes up to $49,999.90 to submit their prize claims by mail. Winners of larger prizes must make arrangements prior to claiming and are encouraged to call the OLG Support Centre at 1-800-387-0098. COVID-19 precautions and capacity limits are in place for in-person claim appointments to protect everyone involved).

When Ken collected his winnings, how did he spend them? “I got myself some clothes, but I’m a very frugal person,” he says. His shopping spree included two pairs of name brand shoes from a discount store. “The most I ever spent on a pair of shoes was 20 or 25 bucks from Walmart,” he says, laughing.

He also bought his daughter a car and helped other family members with rent. The rest of his win went into the bank, and into investments for a rainy day.

The money couldn’t have come at a better time. Ken spent most of his working life in manual labour and also driving a bread-delivery truck. But after two heart attacks and rotator cuff surgery, plus neck issues, he had retired a little earlier than expected. “The money relieves quite a bit of stress,” he says.

He sometimes thinks the win was karma, for helping his friend at her store during difficult times. “You do good things for people and good things happen,” says Ken. Yet another reason to do good things.