"She grabbed me and we just started dancing all over the convenience store." 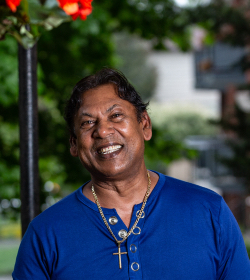 Daniel doesn’t like to do things halfway. When he plays OLG POKER LOTTO he spends the extra $1 to go “ALL IN.” POKER LOTTO already gives players two chances to win — on the spot with a Watch 'n Win game that unfolds on the in-store lottery terminal, and again with a nightly draw. That extra $1 ante is a chance at instantly winning a jackpot that grows with each ALL IN wager. When Daniel was dealt a Royal Flush, winning a Jackpot of $78,984.60, he was also able to go all in on what he’s most passionate about — helping others.

Daniel, a 63-year-old Toronto resident, recalls watching the lottery terminal screen intently as the cards required to complete a royal flush poker hand slowly assembled themselves in formation. The Jack of Spades sealed the jackpot win.

“The lottery terminal started to produce such wonderful sounds,” he recalls. “As it dawned on me what had happened, I looked at my wife and said, ‘We just won 78,000 bucks.’

She grabbed me and we just started dancing all over the convenience store.

Daniel has won the lottery before: a $6,200 LOTTO MAX prize, and two wins worth $5,800 with PICK-4. He already knew the drill, waiting for an OLG representative to call the store to provide him with further instructions on how to claim his prize.

“The guy working behind the convenience store counter was probably the last person in the store to realize what was going on,” says Daniel. “Once he figured it out, he was sweating as the OLG representative called us over the store phone. It was his first time handling such a large prize. For my wife and I, this win was also special—something we’ll remember for the rest of our lives.”

After collecting the prize cheque from the OLG Prize Centre in downtown Toronto, Daniel went to work, distributing the money to the people he knew who needed it most. First on the list, he retired his daughter’s student loan, providing her with a debt-free existence following her education.

“I also sent some money to support a food bank,” he says. “I sent some money to Guyana, both to relatives and to a senior citizen who needed glasses and a set of dentures. I also gave money to friends and acquaintances who needed things— a thousand bucks here and 500 bucks there to help them out with specific needs.”

Considered an essential worker during the COVID-19 pandemic, Daniel works as a plastic fabricator for a company that produces plastic products, including plexiglass sneeze screens and barrier guards to protect service workers and cashiers.

“I paid my workplace for some of the raw material using some of the prize money,” he says. “I took the material home and made guards which I donated to the local drug store and to other businesses in my area. I even made a plexiglass screen and face visor and donated it to the Markette convenience store where I bought the winning POKER LOTTO ticket.”

Daniel and his wife each also support charities through their respective religious institutions — he’s Christian and his wife is Hindu.

For himself, Daniel stuck to necessities — repairing his furnace which had broken down, replacing his roof and paying off his line of credit.

“Without debt, I sleep peacefully at night,” he says. “I can now use the money I once used to spend on the interest on the line of credit to help others.”

What’s the balance remaining in his prize account after distributing so much of it to help others?

“I don’t have any of it left,” says Daniel. “And that feels great.”